Pages from the Journal of Elihu Ashley 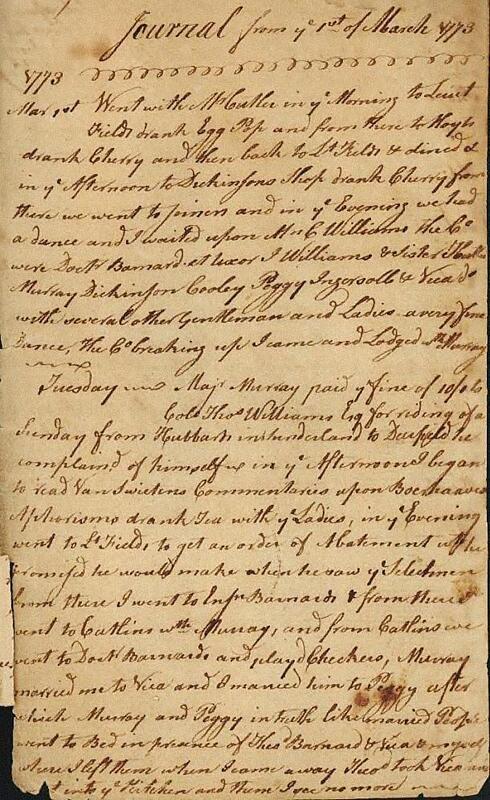 Liberty poles were overt signs of defiance to British rule of law in the colonies. These tall wooden poles, often topped with red Phrygian hats (a symbol of independence from tyranny, dating back to ancient Rome), were erected in towns and cities throughout all 13 colonies.

When two men brought a liberty pole into Deerfield on July 28, 1774, it raised the ire of those in town who supported British rule as well as moderates who feared increased tensions and division would lead to armed conflict. Seizing on this opportunity of mischief, David Dickinson urged his friend, 24-year-old Elihu Ashley, to cut the pole in half before it could be raised the following day. In Ashley’s journal, he describes borrowing a saw from Dickinson and, in the dark of night, sawing the 50-foot pole in half with two friends.

Ashley’s success was fleeting, though. The following day a new liberty pole was placed in front of David Field’s store in Deerfield.

Ashley’s personal account is an example of the divided allegiances in Deerfield and many other small towns. Though many people took up the revolutionary cause (and even arms) of the war, others remained neutral or loyal to the crown.

Journal from ye 1st of March 1773
1773--- Mar 1st- Went with Mr Cutler in ye Morning to Leiut
Fields drank Egg Pop and from there to Hoyts
drank Cherry and then back to Lt Fields & dined &
in ye Afternoon to Dickinsons Shop drank Cherry from
there we went to Joiners and in ye Evening we had
a dance and I waited upon Mr C Williams the Co
were Doctr Barnard et lexor J Williams & Sister T. Cutler
Murray Dickinson Cooley Peggy Ingersoll & Vira do
with several other Gentleman and Ladies a very fine
Dance, the Co braking up I came and Lodged wth Murray

Tuesday Majr Murray paid ye fine of 10/0 to
Colo Thos Williams Esq for riding of a
Sunday from Hubbards in Sunderland to Deerfield he
complaind of himself up & ye Afternoon I began
to read Van Swietens Commentaries upon Boerhaaves
Aphorisms drank Tea with ye Ladies, in ye Evening
went to Lt Fields to get an order of Abatement wc he
promised he would make when he saw ye Selectmen
from there I went to Ensn Barnards & from there
went to Catlins wth Murray, and from Catlins we
went to Doctr Barnards and playd Checkers, Murray
married me to Vira and I married him to Peggy after
which Murray and Peggy in truth like married People
went to Bed in presence of Theod Barnard & Vira & myself
where I left them when I came away Theod took Vira away
& into ye Kitchen and them I see no more---