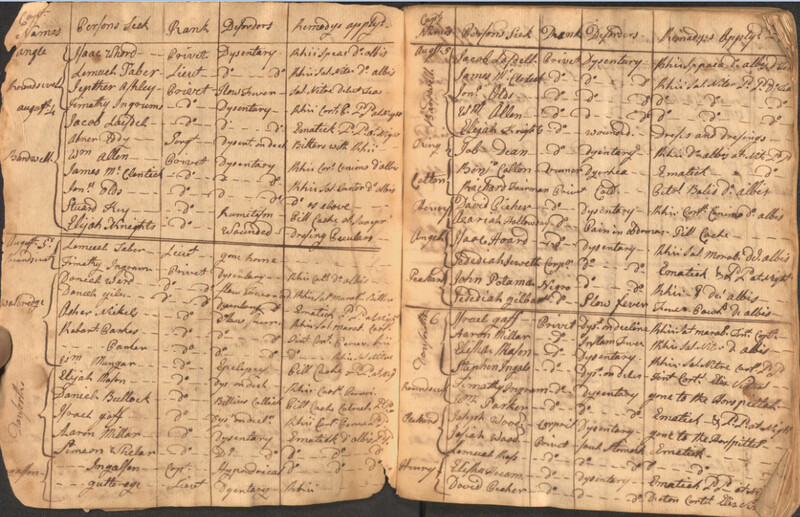 Disease killed more than twice the number of American troops that died in combat during the Revolution. Historian Joseph Ellis suggests that Washington's decision to have his troops inoculated against smallpox was one of his most important decisions. Dr. Estes Howe, one of Belchertown’s first physicians, was a surgeon in Rufus Putnam’s regiment during the first years of the conflict and these notebooks provide an interesting look into 18th century field medicine. Book I records the treatments he dispensed, with the names of the soldiers who were sick or wounded. It includes a list of the troops he inoculated against smallpox. Both notebooks contain important and detailed notes about units and commanders, troop movements, and the day to day life of a soldier.

Dr. Estes Howe was a major figure in Belchertown’s history. He served as Town Clerk, Selectman and in many other positions of responsibility. Book II also contains his Clerk’s notes, 1782-1783. He and his second wife gave the town the land that is now the north part of Belchertown Common.

Local legend – likely true, but not recorded in any known contemporaneous account – relates that when the Marquis de Lafayette passed through Belchertown on his way to the dedication of the Bunker Hill Monument, he was told of an ailing doctor who had given great service during the Revolution. Lafayette asked his driver to stop at Dr. Howe’s home and he visited with him, briefly, paying his respects, before continuing his journey through Massachusetts. Whether true or not, Dr. Howe was among the early doctors in Belchertown (some say the first) and he resided here until his death in March of 1826. His portrait, painted by Chester Harding, proudly hangs in the Stone House Museum.

Please note, this transcription is still under construction. The "Remedies" notes are still being researched. If you have any expertise in 18th century medicine, please contact us!