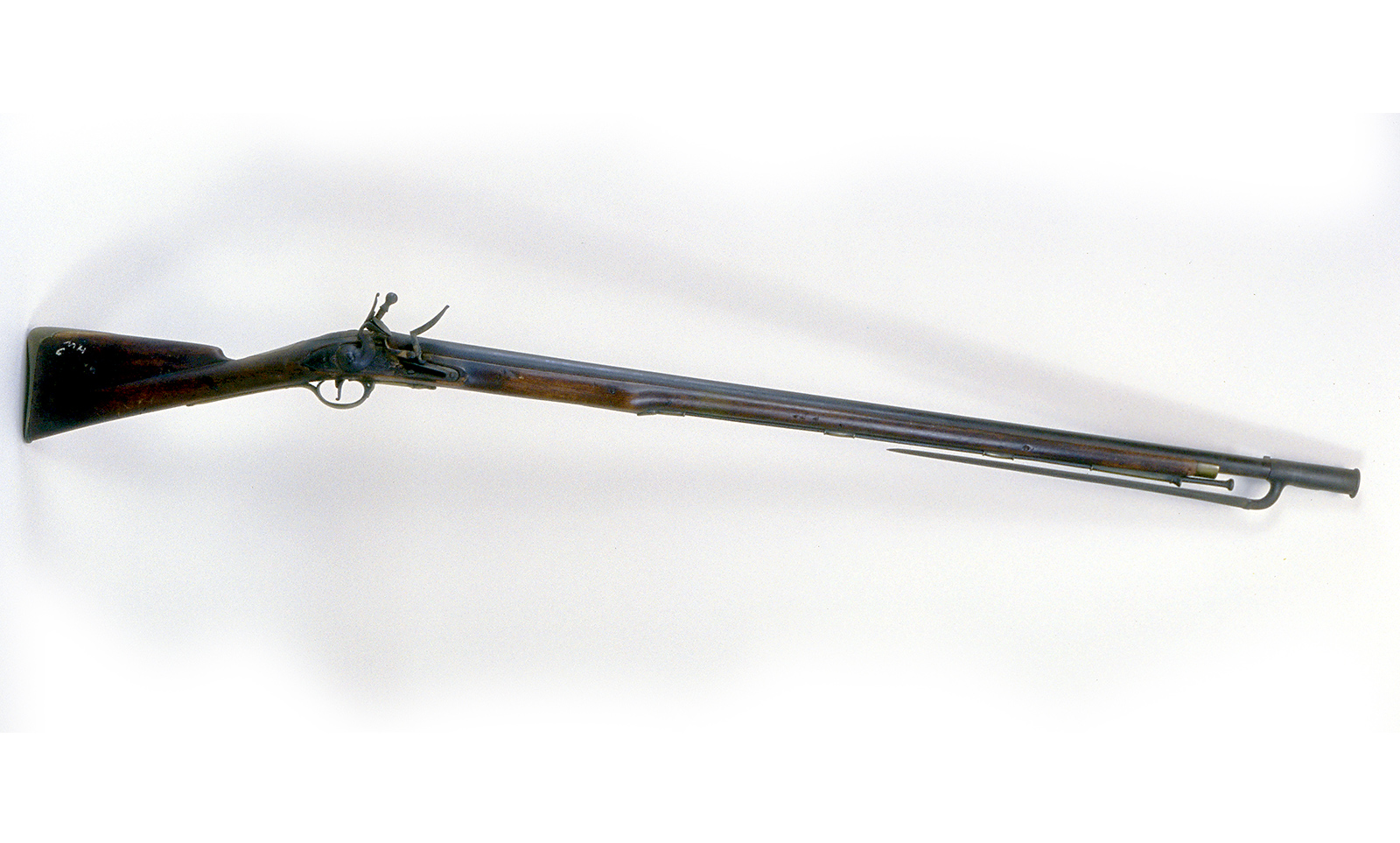 British soldiers were trained to reload and shoot every 20 seconds, even while under enemy fire. Under 50 yards, the Brown Bess was devastatingly effective. However, at distances of 100 yards or more, it was wildly inaccurate. It was said, derisively, that it took a man’s weight in bullets to kill him. Although it could never be as accurate as a gun with a rifled barrel, its accuracy improved in the hands of more highly trained, experienced soldiers.

The fate of this musket’s original owner is unknown. After General John Burgoyne’s surrender at the Battle of Saratoga, militia Captain John Fellows of Shelburne picked it up off the battlefield. Fellows carved his initials into the brass plate alongside those of the original owner “RD 1777.”

Story Addendum
The musket's story, however, did not end when Captain Fellows brought it home from Saratoga.  Nor did it end when it was donated to Pocumtuck Valley Memorial Association in 1882 by John Fellows, grandson of Captain Fellows.  The decision to donate the musket would be a point of contention in the Fellows family for decades to come.

By the early 1900s, John Fellows' great-grandson, Allen, was particularly incensed by his father's decision to donate the musket, which he considered a family heirloom.  When confronted, John conceded that he believed he had only loaned the musket to PVMA for safe keeping.  Thus Allen went to the museum to retrieve the musket.  But when he attempted to do so, he was turned away by PVMA's founder, George Sheldon, who provided the legal documentation proving the transfer of ownership.

Just one generation later, Robert Fellows Wood lamented John's "impulsive" decision to donate the musket to "keen, old" George Sheldon.  Robert had the opportunity to see it on exhibit in 1930 at PVMA's Memorial Hall Museum.  However, on a return visit to the museum in 1954, Robert and his wife, Elizabeth, were unable to locate the musket in the case where it had been exhibited 24 years earlier.  The museum's curator then missidentified the musket they were looking for, leading to confusion and fear that the musket had been mislabled, altered, or worse.

Today the musket is exhibited in Memorial Hall Museum's Military Gallery, correctly labeled and unaltered, thanks to the foresight of John Fellows.