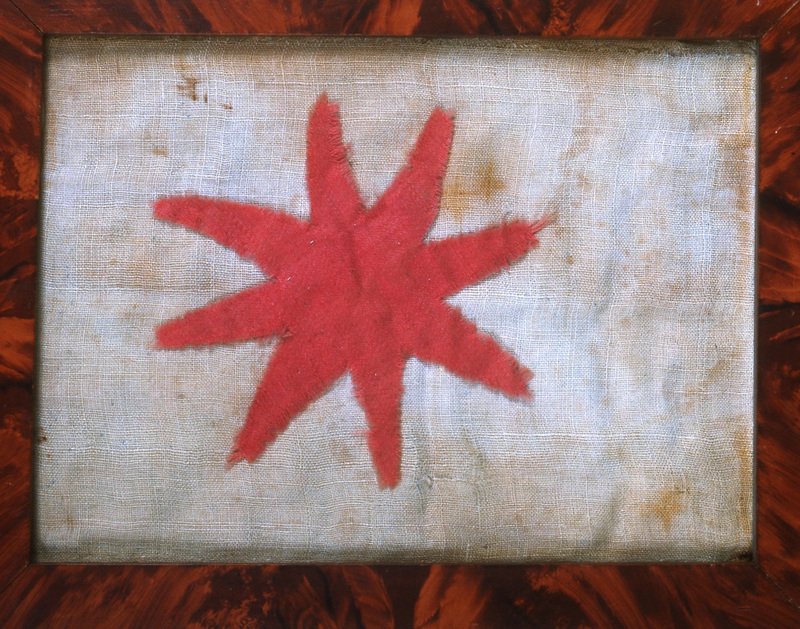 For centuries before and after the American Revolution, flags have served two primary purposes. As a practical matter, flags make it easier for soldiers on a battlefield to identify military units. This was especially necessary when battlefields rapidly filled with smoke from muskets and cannon. Flags also offer a physical representation of a place and the core beliefs of its people. In doing so, they help boost morale among soldiers.

At the onset of the Revolutionary War, the leaders of the cash-strapped, unlawful uprising weren’t able to devote a significant amount of time to designing a flag. In June, 1777, Congress stated that "the flag of the U.S. be 13 stripes alternate between red and white and the union be 13 stars in a blue field, representing a new constellation."

Militias and Continental Army regiments continued to march under their own flags. This eight-point red star on homespun white linen comes from a flag once owned by Colonel Hugh Maxwell of Charlemont. It’s unknown what the full flag looked like.

Maxwell, an Irish immigrant with an impressive resume of military engagements (Fort William Henry during the French and Indian War, Bunker Hill, Trenton, Princeton, Saratoga, Monmouth), was remembered for embodying the sentiments of the flag. A strong defender of the cause of independence, Maxwell formed strong bonds with both the troops under his command and his superior officers. When it came time to name the section of Charlemont that was incorporating as a new town, Maxwell pushed for naming the town Heath, in honor of his commanding officer, General William Heath.