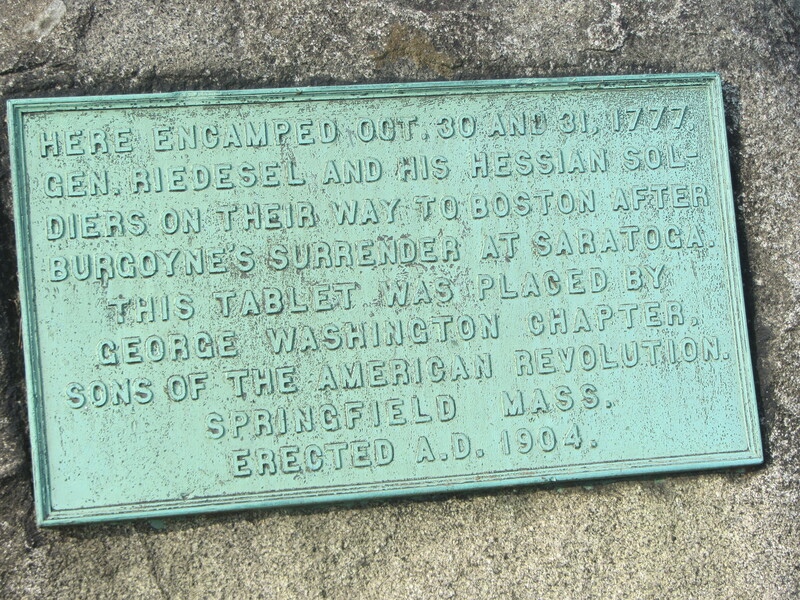 After the English and Hessian prisoners (referred to as the Convention Army because of the manner in which they surrendered) were escorted through the Berkshires of western Massachusetts, they rested in the town of West Springfield before crossing the Connecticut River and continuing their journey through, Springfield, Palmer and eventually reaching barracks in Roxbury/Boston that had been prepared for them.

Throughout this march some prisoners slipped away from the column of march and took their chances among the locals. Many more were eventually released or paroled by the Continental government and allowed to work under agreement for local farmers and tradesmen. The former reason has led to much local folklore, though the latter is the far more common reason for former Hessian soldiers to be found throughout Massachusetts’ and Connecticut communities.

HERE ENCAMPED OCT. 30 AND 31, 1777
GEN. RIEDESEL AND HISS HESSIAN SOL-
DIERS ON THEIR WAY TO BOSTON AFTER
BURGOYNE’S SURRENDER AT SARATOGA
THIS TABLET WAS PLACED BY
GEORGE WASHINGTON CHAPTER
SONS OF THE AMERICAN REVOLUTION.
SPRINGFIELD MASS.
ERECTED A.D. 1904