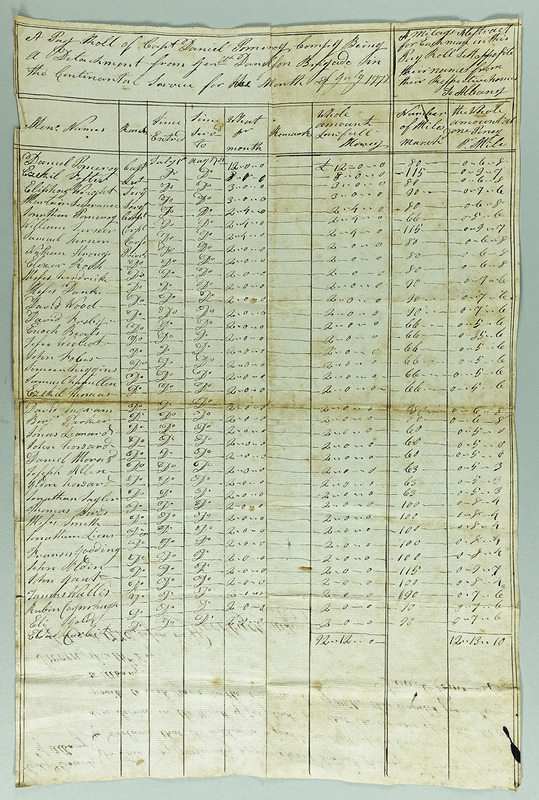 Did you know that soldiers received travel reimbursement based on how far they marched from home? This document lists how much was paid to thirty-seven soldiers who served the Continental Army for the month of July 1778. They served in Albany, New York, and then marched back to their homes in western Massachusetts. These men, who were members of their local militias in western Massachusetts, were temporarily attached to General Timothy Danielson’s Brigade (he was from Deerfield) to do a special service for the Continental Army in Albany.

Everyone was paid a penny per mile for their march home. By looking down the list you can see that several of the men marched the same distance, so they must have come from the same towns. The closest to Albany was sixty miles and the furthest was 115 miles. It is a puzzle to figure out which town was sixty-six miles east of Albany, which one was one hundred miles, and if these are names of men who lived in these towns.

This payroll shows that many men participated in the American Revolution, even if they were part of a local militia and even if they served for only a short time. July would have been an okay time to leave their farms for a month. Their crops were already growing in the fields. The soldiers would be home in August in time to harvest them. While they were gone, their wives and children worked the farm.

Every company had a clerk whose job it was to keep detailed records, like this payroll. He used his good math skills to add up the long column of figures, and then he copied the record several times so that everyone in charge had a copy.