"Eben Graves, his Bible, bought in the 28th year of his age” 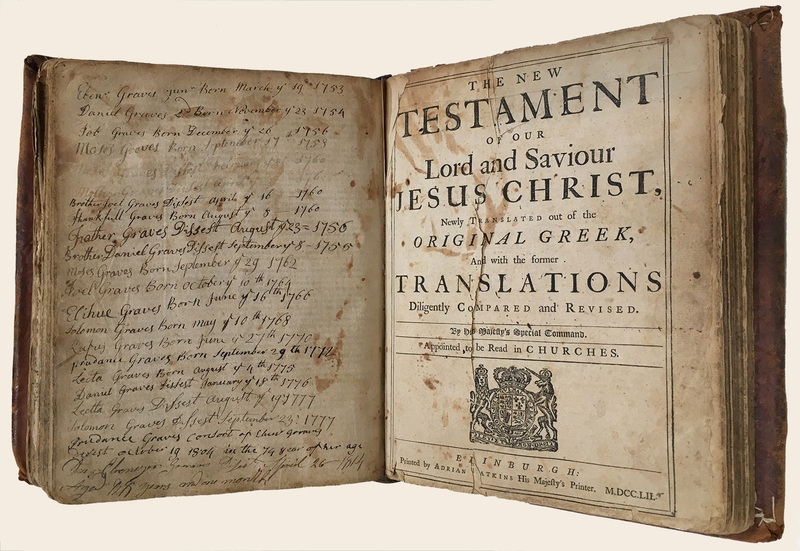 Prudence Hastings was 22, and 6 months pregnant when she and Ebenezer Graves were married on January 1st 1753. Eben wrote on the back of the title page of his Bible “bought in the 28th year of his age, which is the year 1753. Price 6 pound ten shillings." As their oldest son, also Ebenezer, was born in March 1753, it is highly likely that the Bible was bought in preparation for raising the family they anticipated. Their second son, Daniel Graves, was born in 1754. 10 more children followed, all recorded on the blank page between the Old and New Testaments.

The Bible's expense was a major investment in the family's future, equaling $1,930 in 2020 dollars. Having a Bible in the home would help the children learn to read, teach them the ethical and religious position of their parents, and bind the family together through daily prayers and reading aloud. The Holy Bible was the most commonly owned book in colonial America, with annual agricultural almanacs a close second. The Protestant emphasis on the Bible in liturgy, instruction and meditation played a major role in the high literacy levels that characterized early New England.

1753 was also the year Greenfield became a separate town from Deerfield. Eben and Prudence Graves were part of the excitement of forming a new township while they were raising a young family, and were part of America becoming a new country as well. The three oldest Graves brothers were eager to do their part to help bring about the birth of the new nation:

Daniel joined the fight first, and died in January 1776, in the very beginning of the war, but his service record is missing.

Job enlisted next. He started as a Private in Captain John Williams’ company in Colonel Timothy Robinson’s detachment of the Hampshire militia in December of 1776, fought with his unit at Ticonderoga, and served in several different units throughout 1777 and 1779, for a total of 209 days.

The process of independence was not without great hardship and many losses, and the Bible would have been a comfort to the Graves family, even through the deaths of their children: Eben and Prudence lost two-year-old Moses in 1760, and Daniel, their second son, died in 1776 as a revolutionary in the very beginning of Revolutionary War, at age 22. Soldiers traveling through town were often sick, with smallpox and dysentery and other illness, and in 1777, 50 people out of 900 inhabitants of Greenfield died in an outbreak credited to sick soldiers, including Electa (age 2) on the 1st of August and Solomon (age 8) on the 23rd of September.

Imagine Eben and Prudence Graves in the summer of 1777, having lost one son to the war and worrying about two others currently away fighting, seeing young soldiers like their own sons come through town ill, and their baby daughter sickens and dies. This was part of the terrible price of what was, in many ways, a civil war playing out on the home front. Perhaps this Bible gave them some comfort.