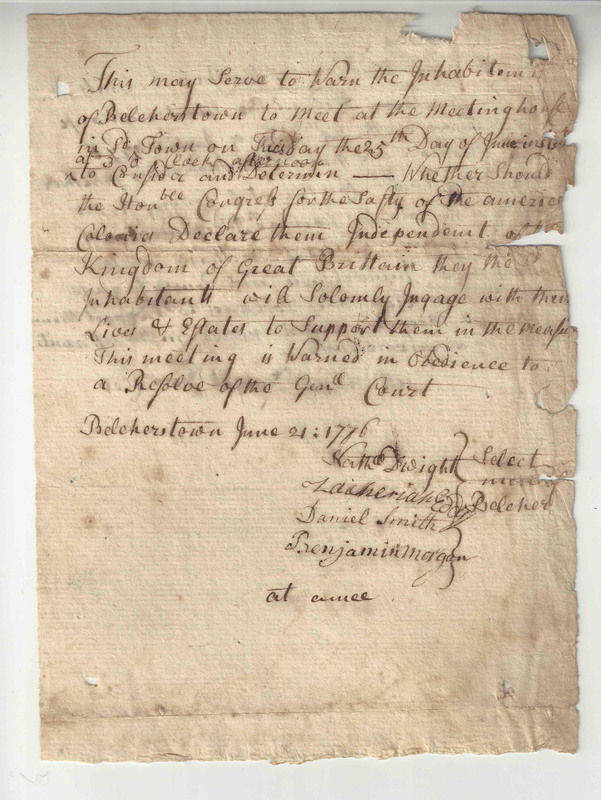 In early 1776, Belchertown, like most of Massachusetts was caught up in the spirit of independence. Thomas Paine’s Common Sense had been published in January, the Massachusetts Provincial Government had drafted a new constitution, and towns and cities were preparing to declare their position on the issue of independence from Great Britain.

On June 25, 1776 a town meeting was held to consider this last question and by “a univercel vote” the residents voted to support independence and pledged to “firmly Ingage with their Lives and Fortunes” to assist the cause. This document memorializes that event.

Prominent among the names recorded on this document is Nathaniel Dwight, who was a scion of the town’s influential Dwight family. An innkeeper, he was a member of the Board of Selectmen and also Town Clerk, at the time. A month earlier, he had been chosen by a town meeting as a delegate to the Watertown Congress. At that time, it was also “voted that said Nathaniel Dwight shall go armed as there is every danger of invasion by the King’s troops that are now stationed at Boston, there being about 4000 men and the Governments of Connecticut, Rhode Island and New Hampshire have 30,000 men that are stationed round about Boston.”

Side 1:
This may serve to warn the inhabitants of Belchertown to meet at the Meetinghouse in sd town on Tuesday the 25th Day of June inst. at 3 o Clock afternoon to Consider and Determine –– Whether should the Hon'ble Congress for the safety of the American Colonies Declare them Independent of the Kingdom of Great Brittain they the Inhabitants will Solomly Ingage with their Lives & Estates to Support them in the measure. This meeting is Warned in Obedience to a Resolve of the Gen'l Court.
Belchertown July 21: 1776
Nath'l Dwight, Zachariah Eddy, Daniel Smith, Benjamin Morgan, Select Men of Belcher

Side 2:
At full Meeting of the Inhabitants of Belcherstown Held at the Meetinghouse in sd Town on the 25th Day of June 1776 the Question was put by the Moderator whether should the Hon'ble Continental Congress for the Safty of the Colonyes Declare them Independent of [the] Kingdom of Great Brittain, whether they the sd Inhabitants will firmly Ingage with their Lives and Fortunes to Support them in the Measure and it passed in the affirmative by a univercel vote.
attn Nath'l Dwight Town Clerk