A Dandy of a Button 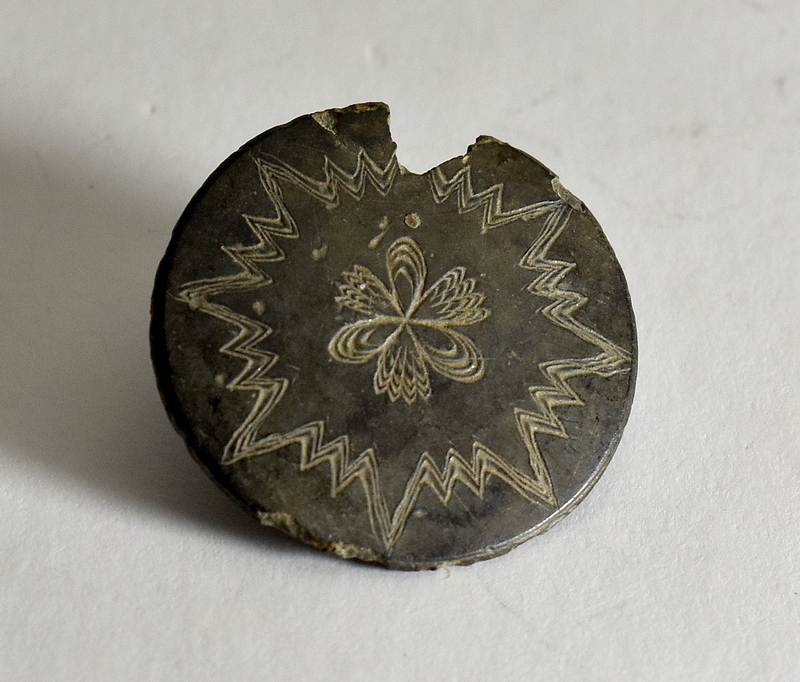 Sometime in the period leading up to the Revolution, someone was strolling along the bank of the Connecticut River in Hatfield, MA. He might have been a stylish dresser, given the fancy engraving of this coat button, sometimes called a “dandy” button in the English fashions of the era. Colonists had deep connections to England, especially for trade goods and manufactured items, and continued to prefer and use British fashions like this button. It’s about the size of a quarter, and most likely not from a military uniform, as those often were either plain or had military-themed patterns. Not everyone in the Revolutionary era was involved in the war, and many of the men who did fight wore a combination of military issued uniforms and their own civilian clothing. Without the rest of the outfit, there’s no way to know if his overcoat was the red of the British Regulars, or Continental Line blue, or something else besides.

This button was cast in a mold, then spun on a lathe to dish out the back very slightly before soldering on the copper loop for the shank. The surface is carved or stamped with a stronger metal to scrape away the dark surface and reveal a brighter metal design. That it had a shank tells us the garment was a thicker fabric, likely layers of linen or wool. Clothing of the era had many buttons, some of them purely decorative. Did the owner even notice he’d lost it? Probably not right away, or he would have picked it up again!

Like all other parts of clothing production, buttons were often saved and repurposed for later use, worn up until they wore out. The wire shank on this one has broken, so it could have come loose by either the thread breaking or the shank giving way, leaving us to wonder what became of the rest of the set, and the man who wore them.

Discovered and donated by Robert Osley, 2020