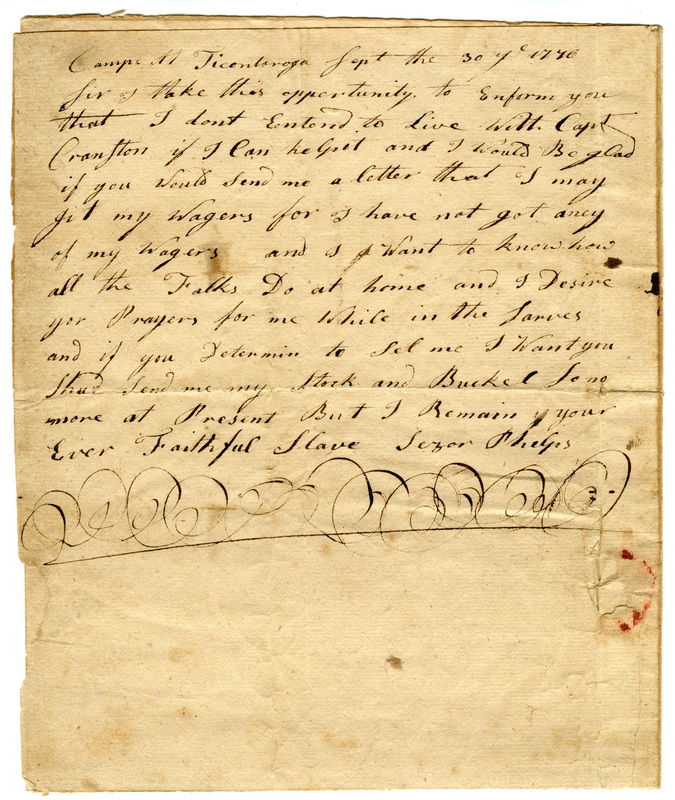 Within the collection of the Porter-Phelps-Huntington Museum in Hadley, Massachusetts, is a letter from a soldier stationed at Fort Ticonderoga, New York, in 1776. The letter, written by a man named Caesar Phelps, is quite brief. Nevertheless, it recounts the Revolution from a very important and often underrepresented point of view.

After its famous capture by Ethan Allen and Benedict Arnold in 1775, the Americans put a great deal of effort into upgrading Ticonderoga’s defenses throughout the following year; Caesar was likely engaged in this work during his time there. The fort represented a strategic prize, and the Americans were determined not to lose it. Despite their efforts, the British managed to capture Ticonderoga without firing a shot in July of 1777, and held it until fighting subsided in the area following the surrender of General John Burgoyne’s army at Saratoga later that fall. Caesar Phelps’ voice is remarkable among the troops at Ticonderoga for the fact that he was enslaved. The only known record of Caesar’s time at the fort is brief— consisting of this single letter.


Prior to arriving at Fort Ticonderoga, Caesar lived and worked at a vast estate known as Forty Acres in Hadley, Massachusetts. His enslaver, Charles Phelps, Jr, was a man of high status in the community, and had him sent to fight in his place. It was common for white men, when called up to serve in the army, to send their enslaved servants as a substitute. Though they would receive the same wages as their white counterparts, they were required to give half or more to their owner. Caesar wrote to Charles in September of 1776, complaining that he had not received his wages. While lack of pay was frequently an issue for American soldiers during the Revolution, Caesar’s poignant letter reveals the complicated and precarious nature of his life as an enslaved person. He strives for some control over his living situation and meager personal possessions even as he acknowledges his status and that Charles has the power to sell him at any time.

Though the letter is signed “Sezor,” it is unknown whether or not he penned it himself, or dictated it to a fellow literate soldier. Regardless, it is his voice. Unfortunately, known historical records of Caesar end with this letter. Whether he died at Ticonderoga, returned to Forty Acres to find that he had been sold, or gained his freedom, we do not know. Today, Forty Acres has been preserved as the Porter-Phelps-Huntington House Museum in Hadley. Caesar’s letter is a small, but important part of its vast collection— one that serves as a rare voice for those who were so often voiceless during this time period.

Click this link to the Porter-Phelps-Huntington Museum website to find more about Caesar and his life at Forty Acres.

Camp Ft Ticonderoga Sept the 30th 1776
Sir I take this opportunity to Enform you that I dont Entend to Live with Capt Cranston if I can helpit and I Would Be glad if you Would Send me a letter that I may git my Wagers for I have not got any of my Wagers and I Want to know how all the Folks Do at home and I desire yor Prayers for me While in the Sarves and if you Determin to Sel me I Want you Shud Send me my Stock and Buckel. So no more at Present But I remain your Ever Faithful Slave
Sezor Phelps