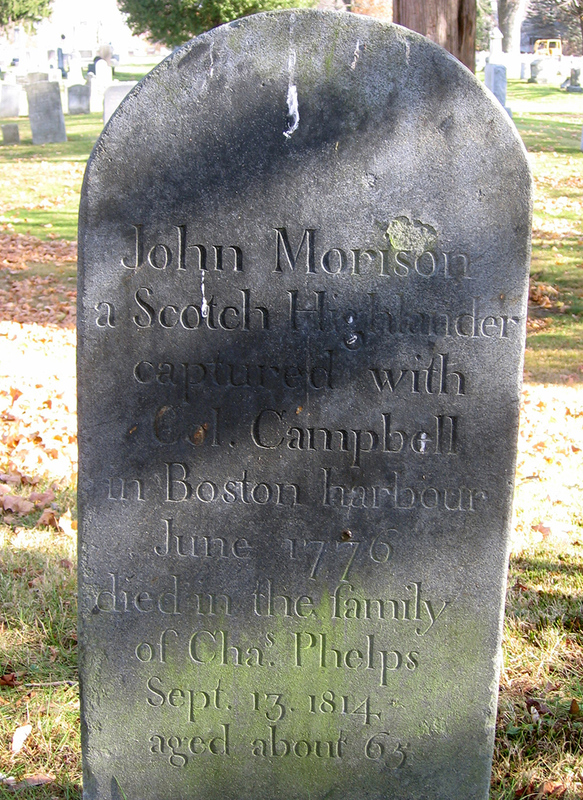 Among the myriad of interesting figures buried at the Old Hadley Cemetery, there rests an unlikely resident by the name of John Morrison. The story of how Morrison came to Hadley begins in June of 1776, when he arrived outside of Boston Harbor as part of the Seventy-First regiment of Highlanders. Unaware of the evacuation of Boston by the British Troops, the Highlanders' ships were engaged by American vessels upon their approach to port. Their commander, Lt. Col. Campbell, decided to surrender to the Americans. John Morrison was among the 267 Highlanders taken as prisoners of war, captured before he ever set foot in North America!

Throughout Massachusetts, the recruitment of local men into militias had put a strain on the available labor force. The shortage of able-bodied farmhands was a serious problem for growers in the area. As a result, farmers petitioned the local Committees of Safety for permission to use captured enemy soldiers as labor in their fields. John Morrison was one of these captives, and was sent to work in Hadley on the locally influential estate then known as “Forty Acres”. On March 23, 1777 Elizabeth Porter Phelps, who managed the farm alongside her husband Charles, mentioned in her diary that “one of the Highlanders” who was captured by her cousin Colonel Porter, was sent to live and work at the farm.

Upon his arrival, John Morrison was initially put to work in the fields. Back home in Scotland, before joining the army, Morrison was an ornamental gardener. With his experience, Morrison eventually was given the responsibility of creating and maintaining the gardens at Forty Acres. Most families in Hadley at the time had gardens but they were most often just extensions of their vegetable plots. It is likely that the Phelps were the only family in Hadley with their own private gardener. Prior to Morrison’s tenure at Forty Acres, Elizabeth had described gardening as sporadic and casual. Morrison’s garden was carefully planned; it was laid out in a rectangular shape with four subdivided paths, a circular rose-bed at the center, and was lined by fruit-trees along its sides. The meticulously designed North Garden brought a sense of elegance to the rural landscape that surrounded Forty Acres.

Morrison was obviously a very skilled gardener. According to family letters, however, he was also somewhat of a notorious drunkard. His relationship with alcohol led to periods of prolonged absences which frustrated family members. He would allegedly skirt his duties at Forty Acres to nap on top of Mount Warner—the hilltop at the edge of the family's estate. It was on top of Mount Warner where he would recover from his bouts of drinking. The secluded area was a great spot for a nap, but it also gave John a vantage point to admire his work in the garden from a distance. The planned and orderly garden, inspired by European-style gardens, would have stood out from the rural landscape that surrounded it. Today, if one hikes to the summit of Mount Warner, it is possible to find “John’s Rock”, a boulder which Morrison regularly used to rest his head during his naps.

After the Revolutionary War, John Morrison remained at Forty Acres. He would eventually be considered a member of the extended Phelps Family. When he died in 1814, he was buried alongside family members in the Old Hadley Cemetery, where his grave can still be seen today. Signs of Morrison’s handiwork, too, are still visible around Forty Acres. The estate has been preserved as the Porter-Phelps-Huntington Museum, and the North Garden is still laid out according to Morrison’s original plan. Many of the same plant varieties that were grown during his time as gardener can be found in the North Garden today. The garden is open to the public, and serves as a testament to the lasting impact of revolutionary war figures like John Morrison.