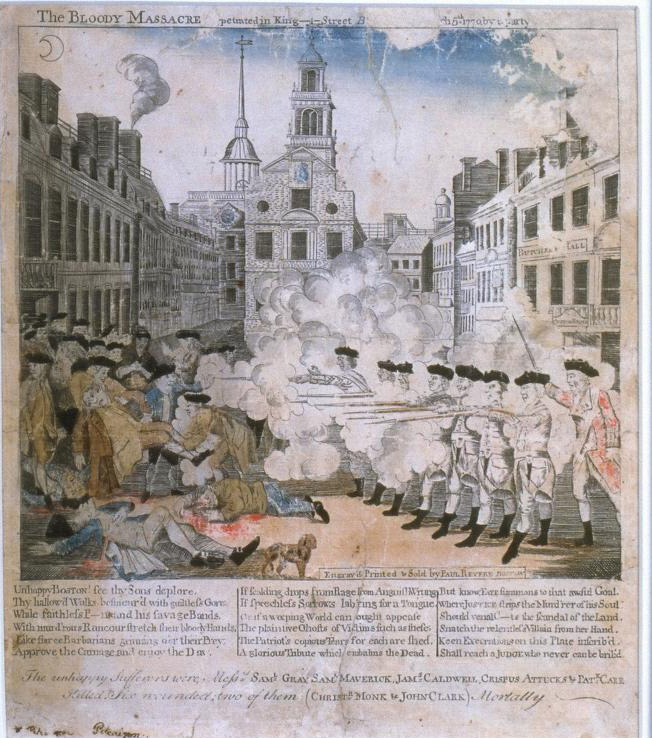 Feelings against the British troops ran high in Boston in 1770. The fact that many English soldiers were moonlighting as dock workers and rope makers made them even less popular among residents whose jobs they were taking. On March 5, 1770 a group of men armed with rocks and clubs began harassing two soldiers on guard duty at the Customs House. Things got uglier when more troops came to assist the guards. The crowd swelled as more Bostonians joined in, among them Crispus Attucks, a multiracial formerly enslaved man of African and Wampanoag ancestry. When the hard-pressed soldiers fired into the crowd, killing Attucks and several others, Paul Revere turned tragedy into opportunity. Paul Revere was a Boston silversmith. He was also a member of the Boston Sons of Liberty and a master publicist. His widely distributed engraving depicting British soldiers firing into an unarmed, peaceful crowd of Bostonians roused American outrage throughout the colonies and made the British army still more unpopular.

The owner of the Old Bay Road Tavern, Jeremiah Stone is said to have tacked this print of the Boston Massacre on the bar room wall where patrons took turns toasting the martyrs who died in the Massacre.