Killed in a Powder Mill Explosion 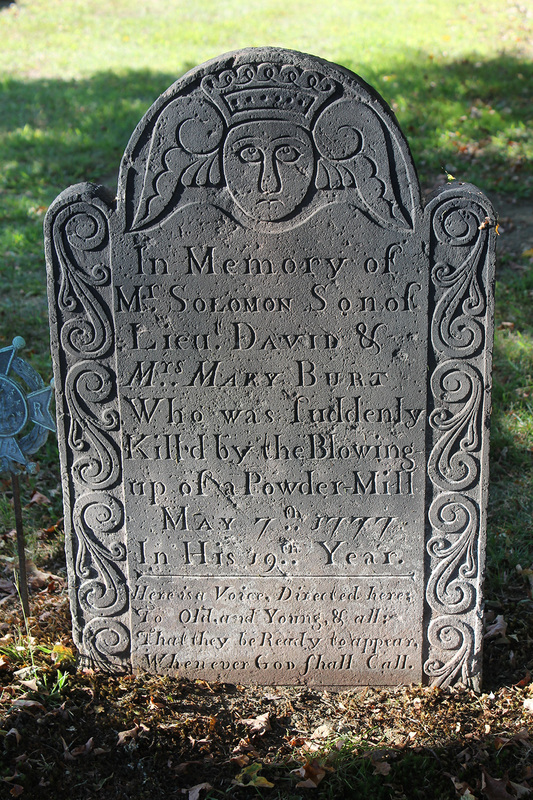 As this gravestone attests, patriots faced danger at home as well as on the battlefield. This stone stands in Longmeadow Cemetery, describing the untimely death of 18 year-old Solomon Burt, "Who was suddenly Kill'd by the Blowing up of a Powder Mill."

Two years before this catastrophe, Longmeadow's minister Stephen Williams wrote about the growing conflict with Great Britain in his diary.  On April 20th, 1775,  the Reverend Stephen Williams wrote (Vol. 8): "this morning–as Soon as it was light, ye Drum beat & three Gun/fired an Alarm–the Story is that Some of ye troops had marched from Boston to Seize Some military Stores, at Lexington, or Concord–& that Some men had been Killed..."   On April 21st, Captain David Burt led 22  Longmeadow minute men to the Lexington alarm. On the 26th, Reverend Williams, upon hearing of various conflicts occurring in New England, prayed "to God to Give wisdom, prudence, discretion and moderation to all his people." In May, he bemoaned the state of affairs: "the nation in a ferment; Some are for violent and coercive measures, with ye colonies, & provinces; some few for lenient, & moderation measures–destruction both to the parent country & the colonies Seems inevitable..."

While Williams seems to have been torn about the rift with Great Britain, the Burt family's sympathies were clearly on the side of the patriots.  Solomon Burt worked at a powder mill situated on the Mill River in Springfield.  The mill, owned by his father David, supplied powder to the American army.

On May 7, 1777, the powder mill exploded, with predictably disastrous results.  Sabotage was suspected, but powder mills were by their very nature extremely volatile, and any spark could have set it off.  The Reverend Williams wrote about the event in his diary (Vol. 9): "this day ye powdr Mill blew up & Solomon Burt (Son to Lt. David Burt) was Kill'd- was cari'd over ye Mill River - Severall rod/ & upon ye Hill - his leggs broke - & his Body much Bruis'd- Asahell Bliss - yt was in ye mill with him - was flung into ye River & one of his legs broke de [ditto]- de [ditto]- a very awefull & affecting providence - ..."

David Burt continued the powder mill business even after the explosion, as detailed in the following document from 1781 in the Lyman and Merrie Wood Museum in Springfield, MA.

The stone's location is Row 8, stone 31 in the Longmeadow Cemetary

In Memory of Mr. Solomon Son of Lieut. David & Mrs. Mary Burt Who was suddenly Kill'd by the Blowing up of a Powder-Mill May 7th 1777 In His 19th Year.
Here is a Voice Directed here' To Old and Young & all, That they be Ready to appear, When ever GOD shall Call.