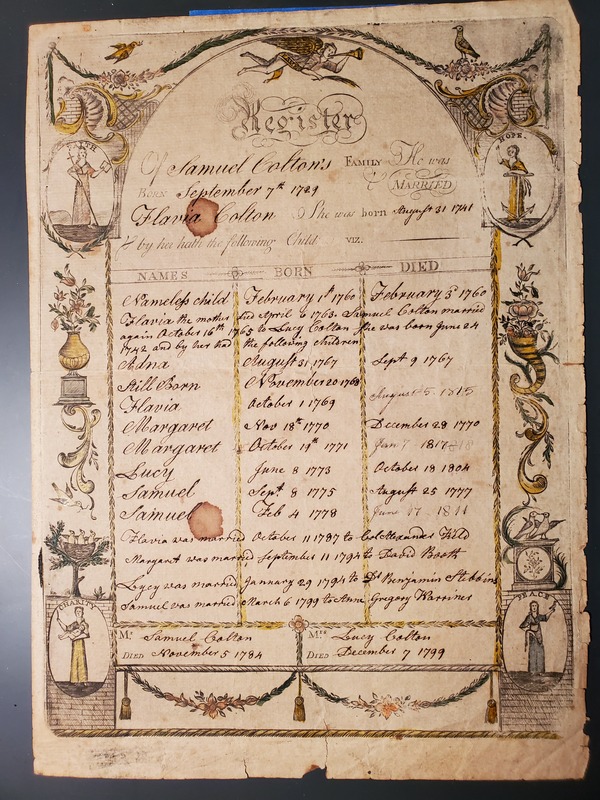 Sometime around 1799, a family register was made to record the births, marriages, and deaths in Samuel Colton's family. This printed and hand-colored register was almost certainly created by Richard Brunton (1750-1832), a notorious engraver, counterfeiter and British deserter. Born in 1750 in Birmingham, England, he apprenticed with an engraver before enlisting in the British Army Grenadiers. He served from 1774-1779 in America during the Revolution, and saw heavy action, including the Battle of Bunker Hill, the Battle of Brandywine, and the British retreat from Philadelphia before deserting in New York in 1779. His career in engraving included counterfeiting currency, which landed him in prison on more than one occasion, including a two-year sentence at hard labor served at Connecticut's New-Gate prison, where he earned money to repay the costs of his prosecution as well as better living conditions by painting portraits of the warden and his family and by creating engravings. In 1807, Brunton was arrested again, this time in Massachusetts, and was given a life sentence. Four years later, the state granted his petition for release due to ill health. In exchange for the early release, he promised to return to his native England, but instead went to live in Groton, Massachusetts, where he died in the poorhouse in 1832.

One of Brunton's legitimate, and perhaps more lucrative creations, were family registers--documents with decorative borders that often included depictions of Faith, Hope, Charity, and Peace, and left room for the recording of the family births, deaths and marriages. These pre-printed family registers are considered some of the earliest American examples. The Colton register includes Samuel and Flavia Colton's marriage, the births (and deaths) of their children, his second marriage to Lucy Colton and their family. These types of family registers were considered proof for official documentation.

Samuel Colton (1727-1784) was a well-known wealthy Longmeadow merchant, earning him the nickname, "Marchant" Colton. His impressive large home, built circa 1754, stood on a rise just south of the Longmeadow town green. When the house was demolished in the early 20th century, parts of the house were salvaged as souvenirs, including the very imposing "Connecticut River God" front doorway, which now resides in a place of honor in the Museum of Fine Arts, Boston. In 1776, a kind of local "tea party" took place at Samuel Colton's shop. Unhappy with Colton's prices for the West India goods he imported (essentials such as rum), townspeople, including his brother-in-law, dressed up as Native Americans and raided his shop. They removed the disputed goods, calculated what they felt to be fair prices and left that sum in exchange. Colton's suit for legal redress failed, and he is said to have remained bitter for the rest of this life about the "theft."